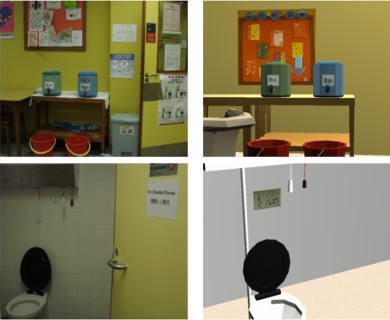 Misconceptions about psychiatric wards frequently cause newly admitted mental patients to stay away from these wards despite their need for treatment. Although ward orientation is typically conducted by nurses in an attempt to help patients to adapt to the new environment, it is considered time-consuming, and the method of orientation and the explanations given may vary among different nurses. This situation calls for a more effective and standardized approach to orientating mental patients on their first admission. To this end, a computer-based interactive virtual environment was developed based on a real psychiatric ward by using virtual reality (VR) technologies. It enables the patient to navigate around to gain understanding about the ward through a virtual guided tour. The effectiveness of this VR orientation approach was investigated by a randomized controlled trial (RCT) with consecutive sampling. Fifty-four Chinese participants were randomly assigned to undergo ward orientation either by using the VR-based approach, or by reading text-based electronic information sheets about the ward with a computer. Subjective and objective measures were obtained respectively by the Chinese version of the State-Trait Anxiety Inventory Scale (C-STAI) questionnaire and the heart rate variability (HRV) measurement before and after the intervention. In addition, a test on the level of understanding about the ward was administered at the end of the session. The results showed that the VR orientation approach is helpful in reducing patients’ anxiety while also improving their level of understanding about the ward.