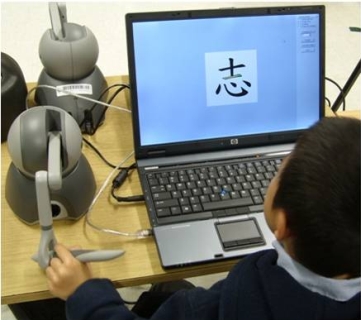 To investigate whether the provision of force feedback as guidance in a computer-assisted training environment was feasible for improving handwriting ability of children with cerebral palsy. 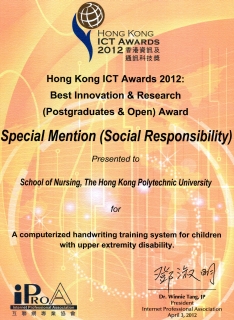 Two children at the age of 7, diagnosed with dystonia and dyskinesia respectively, took part in a two-week pre-post-test study. A desktop computer system equipped with a haptic device was developed to provide visual and haptic cues for practising Chinese handwriting. The system was used by the subjects two times a week. Average writing time and path length of 10 test characters, and the trajectory of the pen tip were used to evaluate their performance. Paper-based test on handwriting legibility before and after the intervention were also conducted and video-taped for subjective comparison.

The subjects were able to reduce the writing time through repeated practice. Path length also appeared to decrease, suggesting improvement in fine motor control ability and handwriting accuracy. One subject showed slight progress in legibility while both of them developed a better sense of the proper ways of handwriting. Conclusion. Provision of haptic feedback in a virtual environment appears to be a feasible approach to improve cerebral palsy children’s handwriting skills.

Showcased at the HKICT Awards 2012