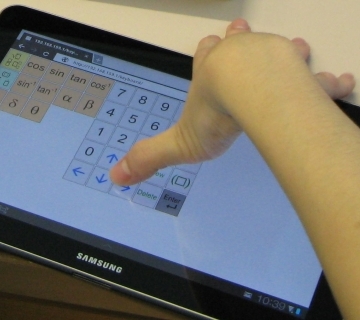 Students with upper extremity disabilities often face barriers to learning mathematics which is largely based on handwriting. While they may instead use computers to do mathematics, conventional input methods using keyboard and mouse do not cater for their disabilities. A touch-input system using tablet device as user interface is proposed to assist these students to write mathematics. User-switchable and context-specific keyboard layouts were also designed to streamline the input process. The system could be readily integrated with conventional computer systems. An experiment involving five participants was conducted to evaluate the performance of the system and collect user feedback. The mathematics input efficiency of the participants was found to improve during the experiment sessions. In particular, their performance in entering trigonometric expressions by using the touch-input system was significantly better than that by using conventional mathematics editing software. The participants rated the touch-input system positively and were confident that they could operate at ease with more practice. The proposed system has the potential to facilitate mathematics learning for students with upper extremity disabilities.